Watch out for the Balls

Possum  keeping me awake last night, I banged the walls a couple of times and it did the job and disappeared. Thankfully  I had all my gear inside, I’ve heard stories of other’s lossing  items such as their boots but his was from Kieas which I’ll see as I head towards  Arthur’s Pass.

I’m meeting Tony on Saturday which is some time away, so that gives me plenty of time to get to Arthur’s Pass. Normally  I’d have this segment  done by Thursday but I’m taking this opportunity  to take things easy and have a few half day hikes instead of the normal  sunup to sundown  long day hikes.

Made it to Hope Kiwi Lodge in good time at 8:30. Passing through cattle  grazing  land and some forest. There were many bush shrubs where  the cattle  were hiding but one sight of me, they stood and steered and then took off in there little family  groups.

It’s forecast  to rain but all I’m getting is drizzle to my back, not enough to put on my weather paints but the cloud  covers seems to be closing in and getting a little colder. Had a second breakfast  at Hope Kiwi  Lodge where I used one of the discarded  gas canisters to do my cooking. Often you see lazy people discarding their rubbish in stead of carrying  it out with them. But this is the first time I’ve seem a half full gas canister left behind.  So with that I cooked up my  noodles  with carrots and silverbeet.  The last of my “live food”,  from here on I’ll be living on dehydrated packet food and cos cos.

Track crosses open cattle flats with cows, carves and balls, this particular group had two  balls and from what I’ve  seen and been told its advisable  to stay well clear of them. Just my luck the track goes through the centre of them but being not being keen on being run down by one of them,  I made a wide  birth around them. But having done that and made it to the swing bridges safety, the balls didn’t  give me much notice unlike the caves and cows which made a greater distance between me and them. 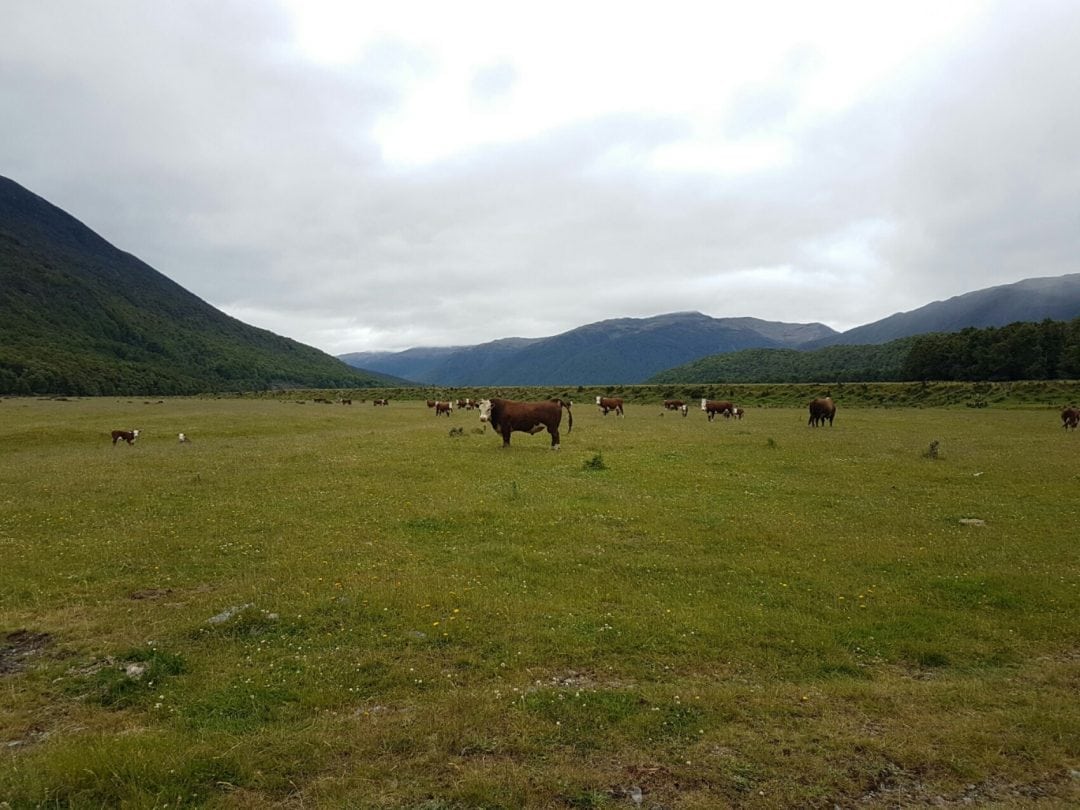 Last night I had the hut to myself it’s nice to have peace and quiet  sometimes, it’s now 4pm and to get to the next hut it’s 4 hours away, so lets says three hours as their times seem to be very generous.

7pm arrival and feeling tired, no I’m staying here for the night and besides, there is a hot pool along the way I may sock  in for a while to rest and relax my muscles. But that’s tomorrow.
The weather today has been good, no sun as it’s been  cloudy. I had to put on my rain paints as walking through the grass was very wet with the grass being knee height. But now at 4pm, the temperature  seems to have dropped and low clouds are slowly making their way down the valley. From the distance I can hear the river and cattle calling out to their mates.  It’s a really nice hut, I counted  16 mattress, fire  place, two tables and a veranda with a great view, better if the bush line was cut down a bit. 5:30pm and I’m bored, did some reading but now I’m getting tired so I should have another hot meal. 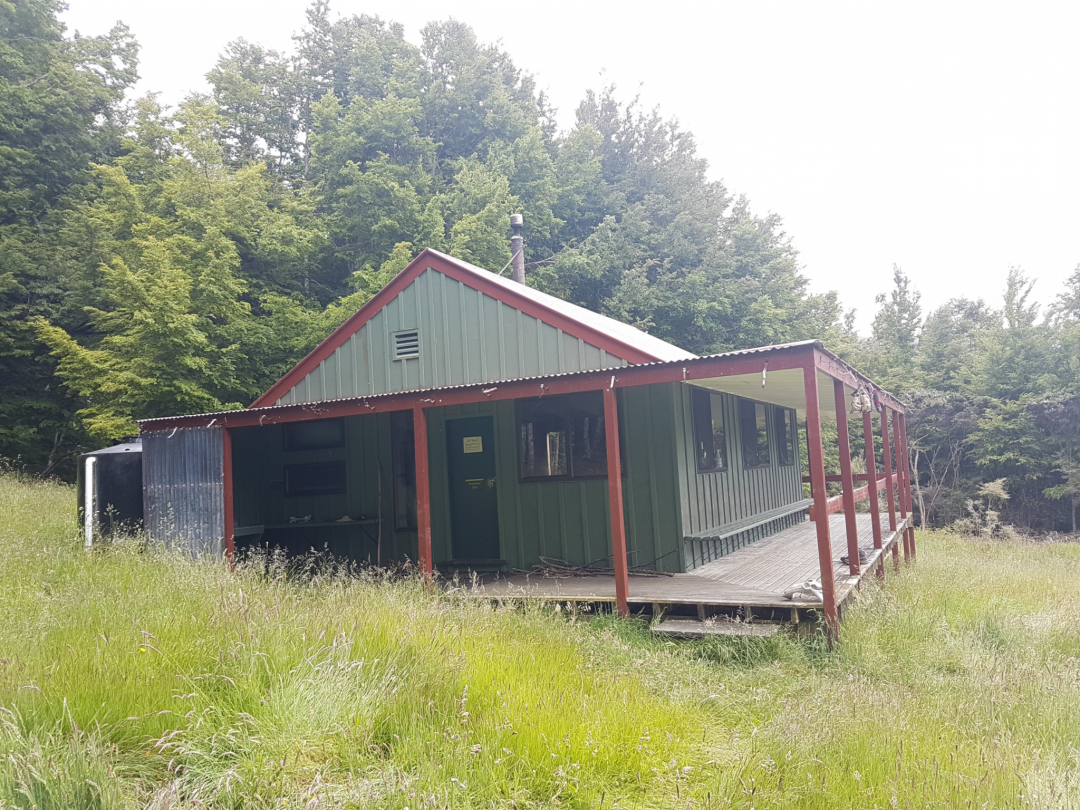 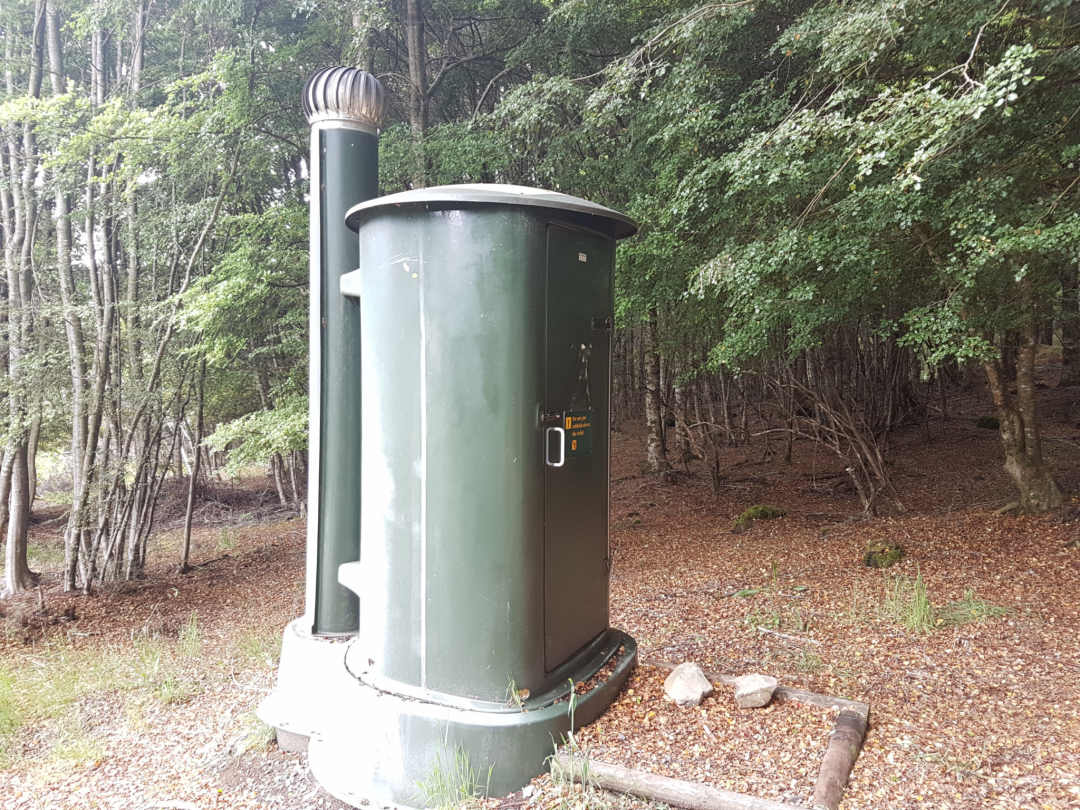 The three other walkers I have been walking with last week are about three hours ahead of me, this works out to be a hut in front of me, today I could push forward and catch up with them, but this would mean I’d arrive at 7 or 8 o’clock  and doing a total of over 30km for the day. So I decided to stay put and relax. Tomorrow  I’ll be walking alone again.  Maybe I’ll come across  some NOBO. (North bound  hikers)