A hot pool and it’s only me

I was awoken by the bird life outside, it wasn’t that cold at 5:30 as I made porridge and a green tea. It was still dark in the cabin so the veranda had the morning light and the view over the valley.

Low clouds and wet grass was going to meet me this morning on the track, my socks were still damp from the previous day but once I go through the pain on putting on wet cold socks on, I’ll be ok for the rest of the day.
A quick clean to leave the cabin how I found it and by 6:30 with the sound of the river and the cattle in the valley, I’m back on the track for a big day hiking. Made it to Hurunui No.3 Hut in good time, along the way I spent time in the hot pool, it wasnt well marked but if you were looking for it, you would see the steam rising from the stream/waterfull. Hot pool where i relaxed in the rain The view I had from the hot pool.

I must have spent about half an hour there just relaxing in the waist deep pool while all around me it was still drizzling. I felt so refreshed after the hot pool and was energised to carry on the next hour and a half to Hurunui Hut 3.

Hurunui Hut 3 was great, there was some one here already with the fire going making the 16 bed hut nice and warm. Inside Hurunui Hut 3, So warm  with the fire going

First time I’ve seen bunks that are three level in height. If I needed a zero day this hut would definitely be the place to spend my time at but being only 10am I plan to march on to Locke Stream Hut which is 6 hours away. This section I have been told by a couple of times already has many river crossing, rock hopping and a selection where the path has been washed away from a resent avalanche.
The guy that was in the hut was from Finland and in the old section of the hut was a inflatable boat or raft. He wasn’t very talkative but he did say the he was waiting for the rain to stop and take to the river and head down stream. I wandered latter how he carried the boat up stream, looked bulky and heavy.
I left the warmth of the hut with the guy reading his kindle and heading south into the drizzle which after half hour turned into rain. Everything was slippy, the rocks I used to cross the rivers, the tree roots I frequently step on to get grip as I walk downhill and even the large trees that block the path that you need to step on to step over are slippy like ice. So as you can imagine I have a few instance when I come crushing to the ground, thankfully with no injuries. I came down Harper pass to where two hikes that were going the opposite direction had told me the other day that I’ll be doing rock hopping and crossing the river many times.
I stood there looking at the river, and the thought of waiding knee to waist deep for the next hour crossing it didn’t appel to me. Just to my left, up a very steep bank I sore footprints and sure enough this were the trail that many hikers have missed. It took a lot of effort to get up that bank but once there the track was relatively easy except for the time my hand brushed up against some stinging needle and that felt like getting an electric shock and even in the next morning I could still feel it’s sting on my hand. Only one other person was in the hut tonight, Tanya woods, she was heavenly into getting the lightest gear posable with her Base weight being 5kg. To give you an idea what 5 kg is, my back weight is more like 11kg. Her tent was a Z-pack solplex which was only 500 grames. My tent admittedly is a two person tent weights at 1.8kg (hubba bubba)

The hut has a fireplace but no firewood unlike the hut I passed with the Finland guy that had it nice and warm, but after dinner and three hot drinks I was comfortable in my sleeping bag for the night. 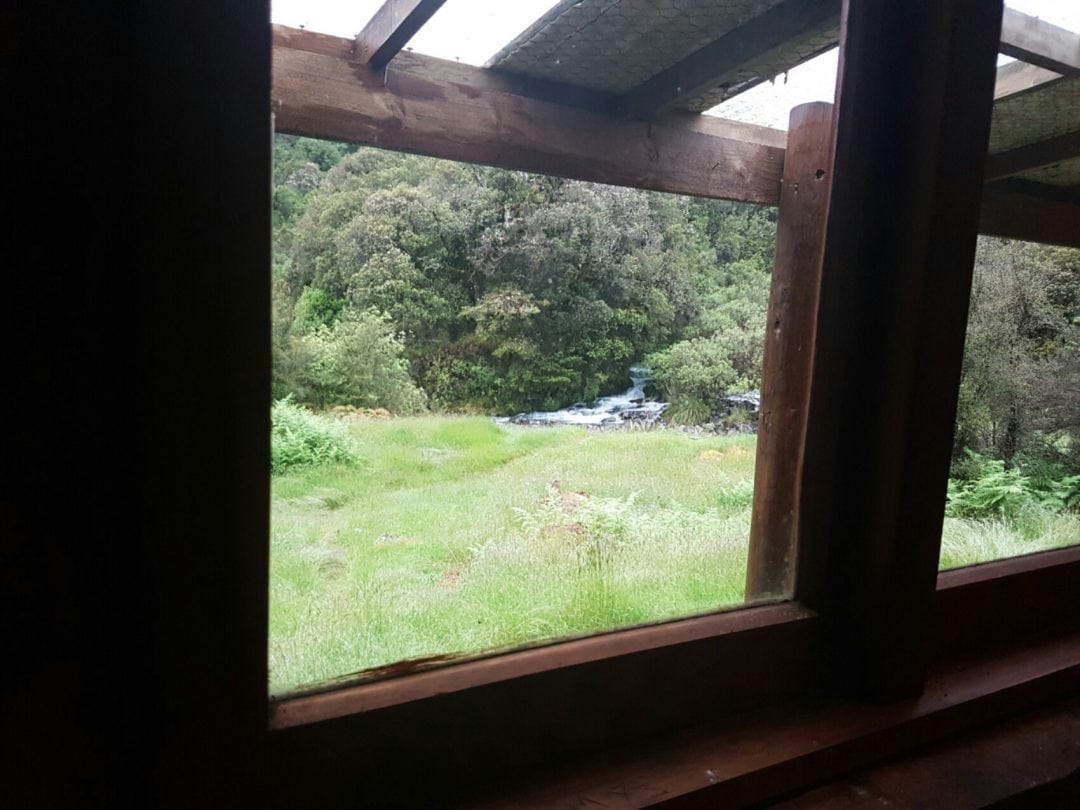 From all the rain we had yesterday and today the water level has gone up and over the vegetation on the backs of the river and therefore it’s considered a flood. So tomorrow I guess it’s going to be a sleep in.