The plan for this morning as to get up early and head off and get to Levin where we have a bed for the night.

Heavy rain last night and it continued for most of the day, Packed everything while in the tent and noticed that the tent is starting to lose its effectiveness with keeping the water out. Some of our “dry” clothes that had been thrown into the corners last night had got wet along with some paper work I had been carrying, but no real damage. Time for our final stage and that was to throw every thing out of the tent that is now in the pack packs and then to pack up the tent as quickly as possible. Even with Eunhwa helping, the tent was water logged all the way through and as I did the final rolling up so it can fit into its bag, water was just pouring out. The turn off for the track wasn’t far up the road, required a steep climb at first then did the usual up down into the forest track. In some sections the track was more like a small river with water flow making a new channel into the path making our traveling more difficult. Crossed a couple of streams and about an hour into our walk, we crossed one of two stream that was definitely for an experienced hiker only. The first was only at knee deep and usually we would remove our boots and put on our plastic shoes so that we can keep our socks nice and dry. But today with all the rain and the condition of the track, our boots were already wet throughout so we just marched through.

The second stream, more like a fast flowing river was to be more challenging, we stopped and discussed how we should approach it and Eunhwa I could see was very nervous and at one point had a little cry and said that she was scared. She says this quilt often as we approach things she hasn’t done before, but in this account I tend to agree with her. But anyway, I wanted to check it out. The exit point of the track was downstream from the entry point for the track on the other side. So first of all, I had to get into the stream and walk 5 meters down stream to the point I head directly across to the other side, as I got to this point where I would simply cross over, the water was up to my waistline, I stood there looking for a way to cross , passing through the most strongest part of the stream and to me, I just felt very uncomfortable. Just the noise of the rushing water was enough to get anyone nervous let alone all the white water that was forming due to the force of the water going through the narrow section and passing over the hidden rocks and this was the point I had no other options to cross due to the high backs on each side of the stream. The current of the water was really going fast, I tried to gauge the depth of the water by reaching out with my walking stick but the current kepted pushing my stick downstream and preventing me from measuring the depth. We abandoned the river crossing and started to make our way back the way we came. We crossed the first stream again and noticed that the rock I used as a step was now covered with water which indicated that the water was still on the rise. 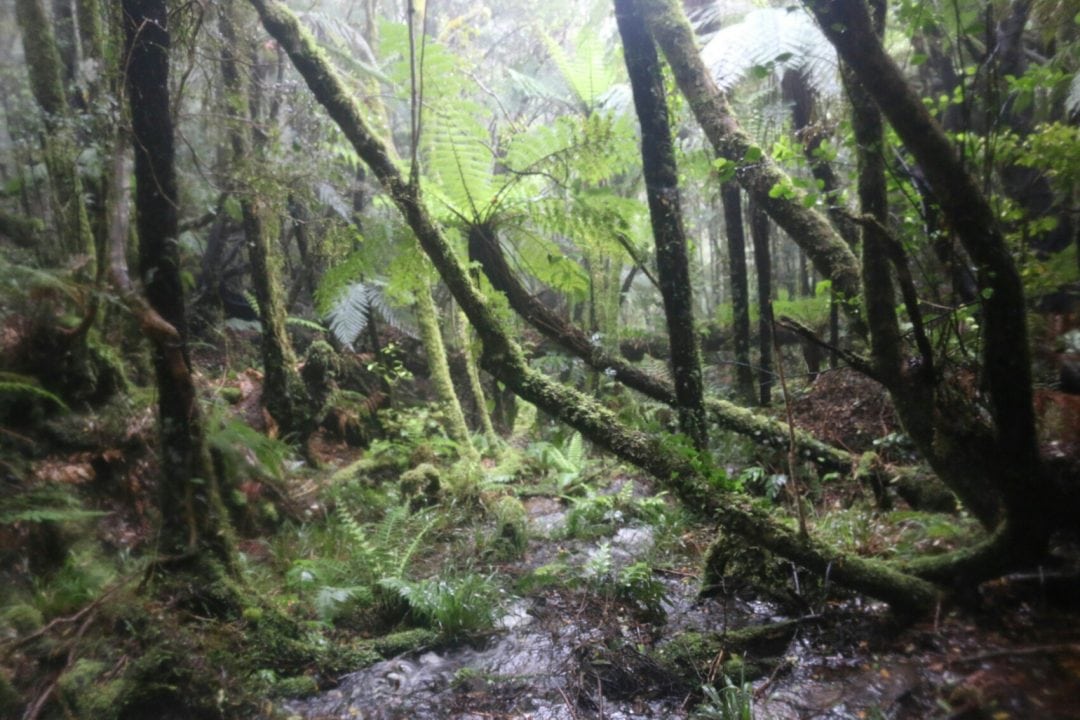 At the start of the track there was a notice that had a map and having a close look at the maps, we counted five or more similar crossing that we would have to do that day and the thought of getting stranded between the streams unable to either to continue or return until the water levels lowered wasn’t a good  thought which reaffirmed our decision not to cross. To get around the track, we had to head to Shannon via Mangaore power station, the road to get there was a countary road that for the three hours we walked the road, no cars had passed us. The rain didn’t let up and now the wind was now penetrating our wet clothes and Eunhwa’s lips were changing color to blue. After changing into dry clothes, her reserved clothes  for nights sleeping, her color returned but still a little cold. Normally we wouldn’t change clothes as its important to have something dry and warms for the evening, but in this case we knew we had a house to rest for the night. Anna-marie came and saved the day, we were walking along the road waiting for her to come from Levin to pick us up. Everything was wet and it was a real relief to just sit in the warmth of the car for 20 minutes, so by 5pm we had the washing machine working and showered to defrost our frozen bodies.

Eunhwa was shaken up with today’s weather, and probable yesterdays problems with her knee and then the soles of the feet. Have I said it before, I’m not sure but the real problems was due to having a rest in Wanganui for to long. If it was only 3 days not seven days as planned  her body would still be in conditioned and putting on a heavy weight on her back wouldn’t have stressed. For the 60 days we have been on the track, Eunhwa has only problems twice with her knees, I mean real problem where pain was so bad that it brought tears to her eyes. And that was at the start of Ninty mile beach at day one or day two and again after a seven day rest of doing nothing.

But putting all this together, emotions were running high. The weather for the next three days is for no rain but come monday there was to be a weather front coming from the south which meant more rain. We still have 4-6 days of the Tararua Ranges to do which is the area where recently  two hikers had lost their lives to to hyper exposure, I’m not sure exactly where it happened but for sure I know its around these areas so the weather can be very unforgiving.

Eunhwa wanted to take it easy and only walk a couple of hours then us the hut, I wanted to put in long days and get through the rangers at a good pace and get through most of the track before Monday which means rain. This hasn’t been resolved so tension was high between us.