Early start of 6:30 and I feel much better than I was last night.
Leaving behind Lake Ohau with a full rainbow and great views.

We must have done over half the 800 meter climb yesterday, as this morning, with the wind to our backs it was easy.
Stopped for the second breakfast 4 hours after starting off this morning at the Alpine hut which was made out of local bush material and rusty corrugated tin 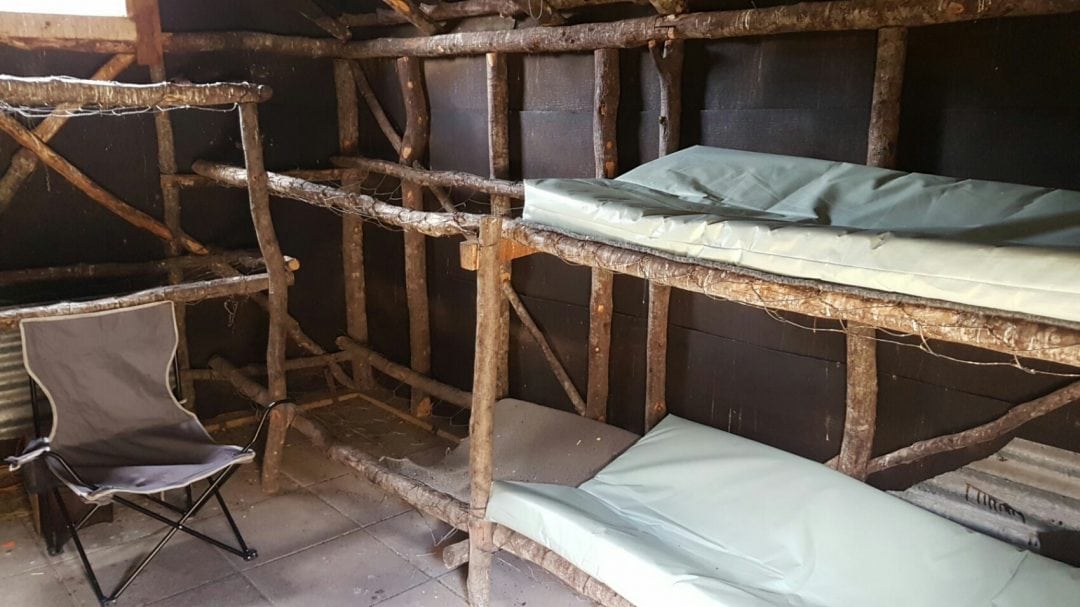 Leaving a message in the DOC book

Dark clouds are building up with a 40% chance of rain according the the weather man, tomorrow it’s 80% but if the weather report is correct, that will be during the night. Crossed the Ahuriui River, it was a tough decision to cross or not, there was another option which involved a 5km walk down stream to the bridge then the same back, that equals to over three hours of extra walking. The crossing looked bad, what made it look bad was the wind coming down from the valley from the west making white caps on the river which made it hard to see the bottom.

We crossed, wasn’t as hard as we first thought but it’s the first time I had to cross walking on an angle heading upstream. This was only because there were limited choice and we determined that was the safest. The wind for the last couple of days have been very tiring. Head wind for a couple of hours with strong gusts then you get thrown to the side from a sudden change in wind direction, I’m so over this wind.

We crossed paths with a TA hiker heading north at the car park just half an hour from the river we just crossed.  He told us about the two upcoming huts where Ken and I were planing to stay at the second hut, this would mean arriving latter than 8pm. We stopped for a late lunch next to a stream in the shade and rested for half an hour. I’m definitely eating a lot more now days, probable twice the amount I would have eaten when I first started out in the north island

5:30 we stopped at the first hut, this is where we decided to rest for the night, the hut was really messy, the worst hut so far and no wander as there was no broom to clean up the place. Looks like a great place for mice to feed on our food supply so the backpacks are definitely getting hung up tonight.

The mattress for the bunks were old and stained which made you think twice about sleeping on them, I used my roll mat on top of the mattress to separate me from the smelly Base. Come 7pm when I turned in for the night, the rain started to hit us hard , the hut was shaking with the corrugated tin  on the ceiling and outer walls was creaking and banging. I was thankful that we stopped at this hut as if we didn’t, we would still have another  hours walking when the rain would have hit us.