Did we cheat today?

Did we cheat today?

Our host this morning made us eggs on toast with coffee which was another nice treat and for a couple of hours we had the comfort of a kitchen. We got offered a lift back to the track as we departed from the main road to get to the “Camp site” as its was about 5kms all down hill to get here last night, the thought of walking up hill on the same ground we covered the previous day wasn’t pleasant. So we agreed.

Some parts of the trail are along the highway and the section were are about to do for the next three kms was indeed along the H/way and was very narrow with windy road, the lady that gave us a lift to the main road strongly recommended us not to walk along the main road and instead she wanted to give us a lift the three km to where we branch off to a bush track. We accepted and while in the comfort of the car, we realized and agreed that it was indeed narrow with traffic traffic traveling at high speed. 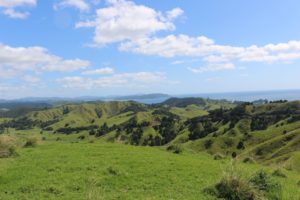 Once on the track, we stopped off for lunch at the turnoff for the Morepork track were we were getting creative with simple things with out basic food such as our Toronto bread raps, peanuts butter, silver beat leaves, which is one of the first green vegetable we have had on the trail and cheese thrown in.

While sitting there having lunch at the junction, we could hear a farmer from a distance using his sheepdogs to round up his stock with the use of his whistle. moments latter he came by riding his horse and as he came around the bend, his hours was unsettled with us sitting there and was very nervous. He opened the gate to his farm then returned to say hello while still on his horse. The farmer must have been in his 70’s where I’m sure I sore him a couple of hours earlier as he passed us in his LandRover with his dog in the back seat with his head hanging out the back window.

He knew who were were as he said hundreds of hikers, like us, pass this was each year doing the Te araroa. He looked like a real character, sitting high up on his horse with the dog whistle around his neck and a stock whip hanging from the saddle and hear I was thinking it was only Australian farmers that dressed like that. He came closer and i didn’t get up as i was concerned that we may frighten the horse again but instead we talked for a short period and took a couple of photos. 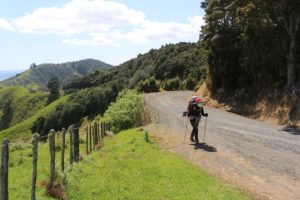 We pushed on, climbing up and down hills which by now has become a norm in our day by day travels. Our goal for the day was to free camp for the night and by 6-7pm, all we could see was private land which meant we had to push on a little further, we had passed a paid camp site much further back but now it was much to late to return. As we walked along the coastline with well defined markers and signs to discourage walkers like us to not venture off track and camp anywhere onto private land that had access to a private bay. We finally came to a junction hidden from view in the bushes where it was a perfect place to camp. Timing was perfect as by the time we setup the tent and cooked dinner, the light was fading real fast.