Buffet breakfast made me lazy, but it was nice

Just noticed that I was only 4.1 miles from Old Faithful Geyser and Village, so at 5:30am I was up and packed and heading for the Old Faithful Inn where a Buffet breakfast was waiting for me, after doing an hour and a half on an empty stomach, I definitely  got my monies worth. Back entrance to Old Faithful Inn

On the outside the Inn didn’t look much, admittedly I entered via the back entrance, but when you enter, the architecture was breathtakingly Electric candlesticks were mounted on all main supports and the fire place was constructed of native volcanic rock. Lodge pole pine railings and rafters abound which gave the appearances of an old pine log cabin but on a much grander scale. Dining hall where I had breakfast

I think the architecture maybe resembles a tree house with so much of the structure made up of wood and many steps heading to the ceiling which appears for no other purpose than to reach the top house, tree house? I was later told that it’s closed off due to fire regulations there being only one exit,  so only to be used as a access point to raise and lower the flag each day.

I spent the morning here, relaxing and charging up my battery packs before my planned departure just after midday. A nice little treat before I start back on the trail

The plan to leave just after midday didn’t work, I was still full from the buffet breakfast and it was really nice sitting in the old style furniture on the many levels within the Inn,  I was able to have a shower and clean myself up and just after one o’clock, I had a nice hot cup of chocolate.  Then of course I couldn’t leave until I watched old faithful  let off it’s steam again, and as I was getting ready to leave, the sight of many people eating ice cream again delayed my departure. The strawberry and vanilla ice cream in a tub hit the spot while I sat outside people watching. It wasn’t until l 3 o’clock I finally got motivated and started my way out of Yellowstone passing many Geysers along the way.  It was hard going with an unexpected uphill climb for a good two hours.  At Summit Lake there was a campsite but with all the insect wanting to feed from me I climb a little more and found a nice spot with a steady breeze to make things comfortable. 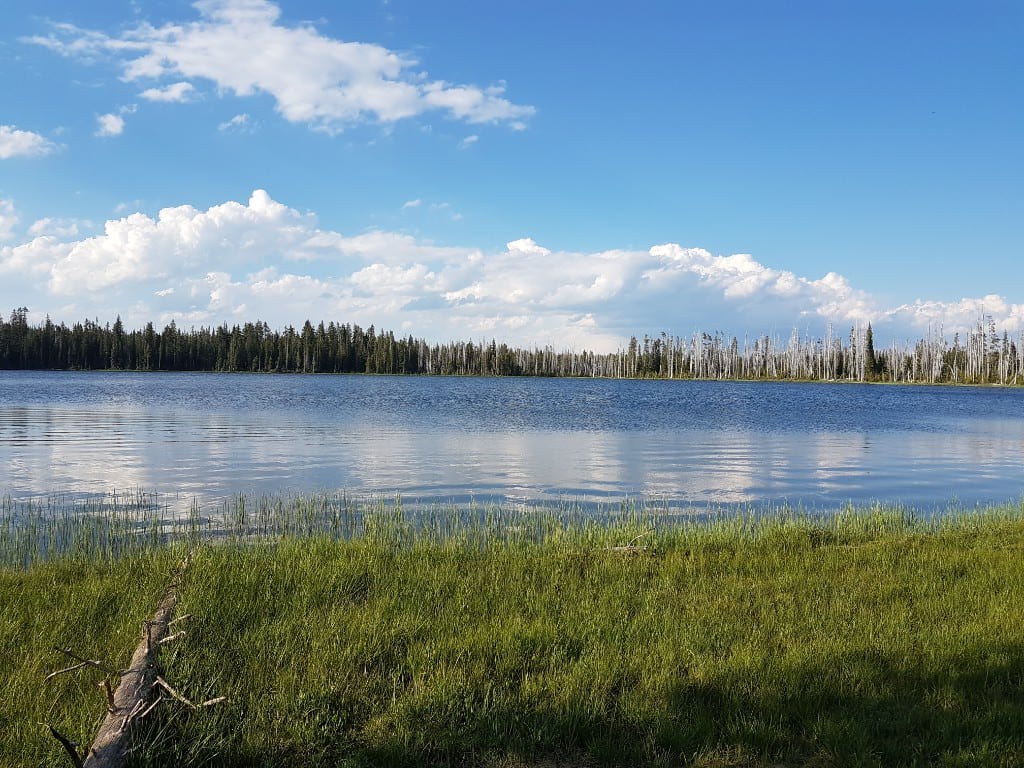 Summit Lake
Finally I stopped and camped, by rights I wasn’t allowed to camp within the national park as I only paid for one night with the intentions  of making it over to the Idaho’s border this afternoon.  But as I was only 3 miles short of the border, I’m sure no park ranger is going to  catch me tonight.