The morning birds woke me early this morning and by 5:30 I was back on the trail.  It’s getting easier to get started in the mornings now days, it isn’t so cold as long as I camp below 10,000 feet. Nice views along the way

Within an hour and a half I’ve come to a decision point, do I climb up to Park View  peak or walk around it which is an extra 4 miles? 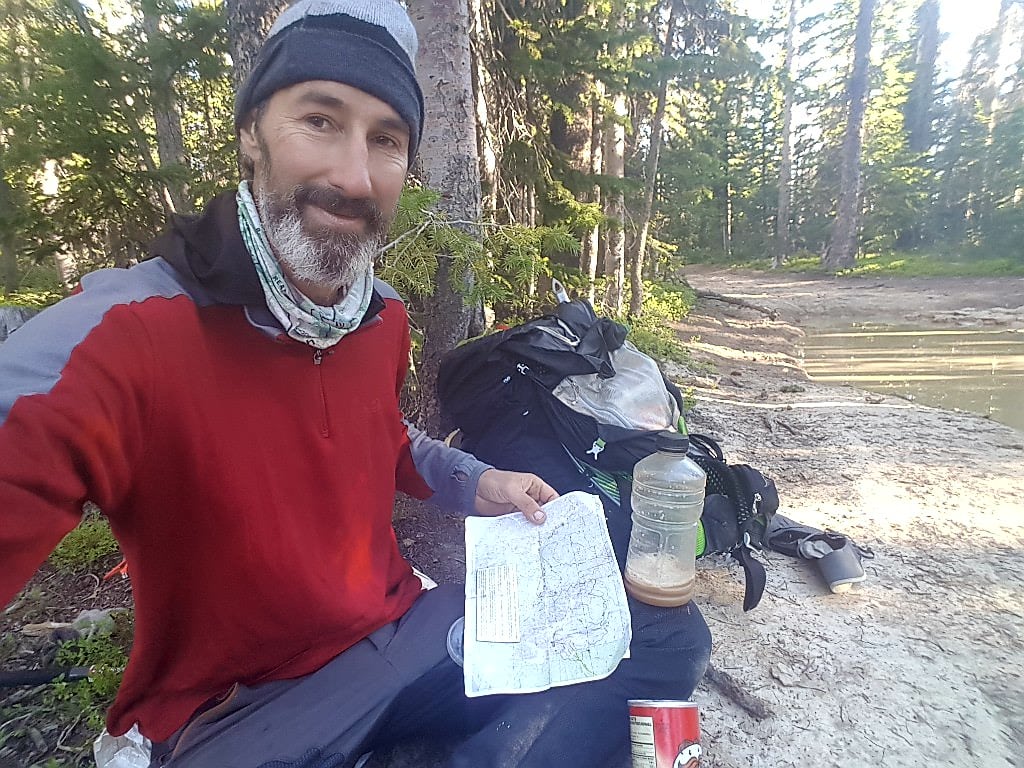 Planing my new path to avoid  the ice sheets

While in Grand Lake,  three days back, I meet three through-hikes at the post office, they were going the opposite direction, south, and I’m heading north, and they advised me that if I could avoid climbing Park View that would be best.  These three were young and fearless but they told me about a segment that they crossed was snow and had turned into a sheet  of ice.

Again yesterday I meet a couple that knew about the crossing and gave me a maps of a walk around. It added an extra 4 miles to the trip but it was more or less flat ground and much safer. View of Park View  mountain, but the problem is on the other side, north side

So here I sit, finishing off my Pringles, ice coffee for breakfast and have made the decision.  I’ll take the safe route  and walk the extra 4 miles.

Easy walking, some parts of the road I was unsure if I had to turn right or go straight ahead, this was easy fixed by looking for the couple’s foot prints that came through yesterday. It took an hour longer than expected, I was about to do the final ascent to the pass, and i decided to stop and have lunch. Shoes and socks off, my food bag was out of my backpack and then a ATV  pulled up beside me.  We talked and then he offered me a lift to the top, naturally I happily accepted and what a thrill to be in one of these.  It was only 5-10 minutes but mud was getting flicked everywhere and the ATV had no problems in getting to the top only to be stopped by a wall of snow that yet to be melted.  Jim walked  with me to the top, which was only  less than a 100 metres, and then I once again unpacked everything and had lunch. My backpack strapped  to the back of the ATV

More climbing this after noon, thankfully the snow was no problem and with a blue sky about and regular streams from melting snow above, I hadn’t need to carry extra water.  Stopped at 7pm just before a big climb as I thought I’d save that for tomorrow morning. Camping on the trail itself. It’s the only flat ground available