Frozen tent, i wasn’t as fast as Ken with getting everything packed and ready to go.  So he was ten minutes ahead of me, we were 10 miles from Creede which is a small town where  I have sent three packages too, shoes, socks and a down jacket. It was easy going and all down hill, I passed Ken and later i rested up just 4 miles from Creede at a boat ramp where I watch a local launch his angler fishing boat into the river, the river itself was very swift and in my eyes was much to dangerous for such a small boat. He said, he and his mates were going fly fishing, don’t  you need calm waters for that I asked, but down river there are pockets where he pulled his boat over and fishes.

My tent and sleeping bag didn’t take long to dry in the sun while i had my second breakfast.  Ken didn’t turn up so maybe he found another way to the town or he got a lift as the last 5 miles was on a road.

Post office was the first port of call and it felt good to throw away the old cross trainers and following close behind were the worst of the socks that were filled with holes. Old buildings in Creede, something from the past

Coffee at the cafe across the road and not long later Ken turned up.  I didn’t need much from the supermarket, just two days worth of food, as usual I was carrying too much food. But with all the snow walking we have been doing I’m happy to carry extra.

Creede was a really nice town, rich with history of mining dating back to the 1800’s, however, we didn’t hang around the town long and somehow we didn’t have that planned lunch, thankfully I had something from the supermarket, fruits and yogurt. The walk out of town was an unexpected climb that didn’t stop until I got to the top to meet the main trail again which must have taken 2-3 hours.

Passed a fire station that was built inside the mountain that was obviously part of the mine itself, maybe a main entrance to the underground mine.  Along the way there were many wooden building all clinging to the side of the valley with a single purposes of mining. I couldn’t help thinking how harsh the conditions must have been in particularly the colder months with nothing but snow all about. 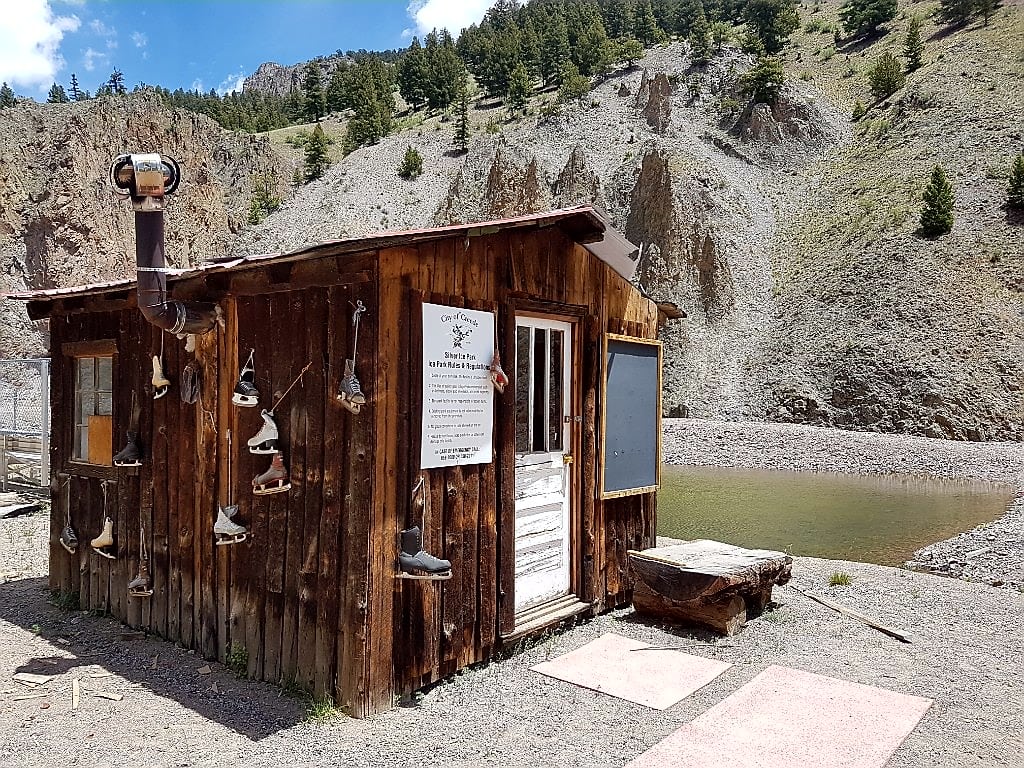 San Luis Pass, finally hit the snow, at first it was easy going but then I had the Pass to get over, the snow was deep and soft in a lot of area’s.  I sunk up to my hips struggling to pull myself out and at one point I had to crawl on my hands and knees to cover a section of soft, deep snow. Fortunately  it was just the once and for a short distance Old mining building as I walked out of Creede

Over the pass,  and for the rest of the evening I was going downhill with every step was less snow on the ground.

Just 5 more miles was a camp site that was marked on my map, enough for three tents it says, so i made it my goal to get there to camp for the night.  It wasn’t until 9:30 in the evening til I got there but along the way I saw two groups of deer that crossed my path. With the headlamp shinning the way for me, I surprised a lot of wildlife on the trail, mainly birds resting on the trail itself, but a few times i got a surprise from unknown noise coming from the bush.

Camp site had a fire pit but I was to tired to use it, with the full moon, I setup camp and after a basic meal of couscous with chicken, I was soon sound asleep.