Comes in threes? Thankfully not this time

Comes in threes? Thankfully not this time

Walked into town from the camp site which was all down hill and only took 30 minutes.  A local I met yesterday morning said that the best place for breakfast and good value was at the Quality Inn, and indeed he was right, I must have eaten enough food for two people with many coffees for all at a cost of ten dollars. Thank fully no one was watching me returning to the bayonets to refill my plate many times or maybe they recognised me as a through-hiker that a hunger cannot be satisfied . Arrived back at the start of the trail

I hitched out to the trail head which was the Wolf Creek Pass, on the road there were seven of us in various groups planning the same thing, to get to the start of the trail.
Ken soon met me out there as he preferred to pay 40 dollars for a taxi drop off, hitching was too easy and doesn’t cost a thing. The only downside is that it takes time and you need to be entertaining to the driver or maybe the driver entertains me. On the trail we are, going was good even though it was mostly on snow, on a section I was following Ken and all of a sudden he slipped.  Without warning, the tip of his walking stick swung around  and hit me just below the eye.  I was taken by surprise and fell to the snow covered ground. covering my left eye, there I stayed for what seemed ages with many things flashing before me in my mind. Is my eye ok, do I have to see a doctor or is this the end of my hike? 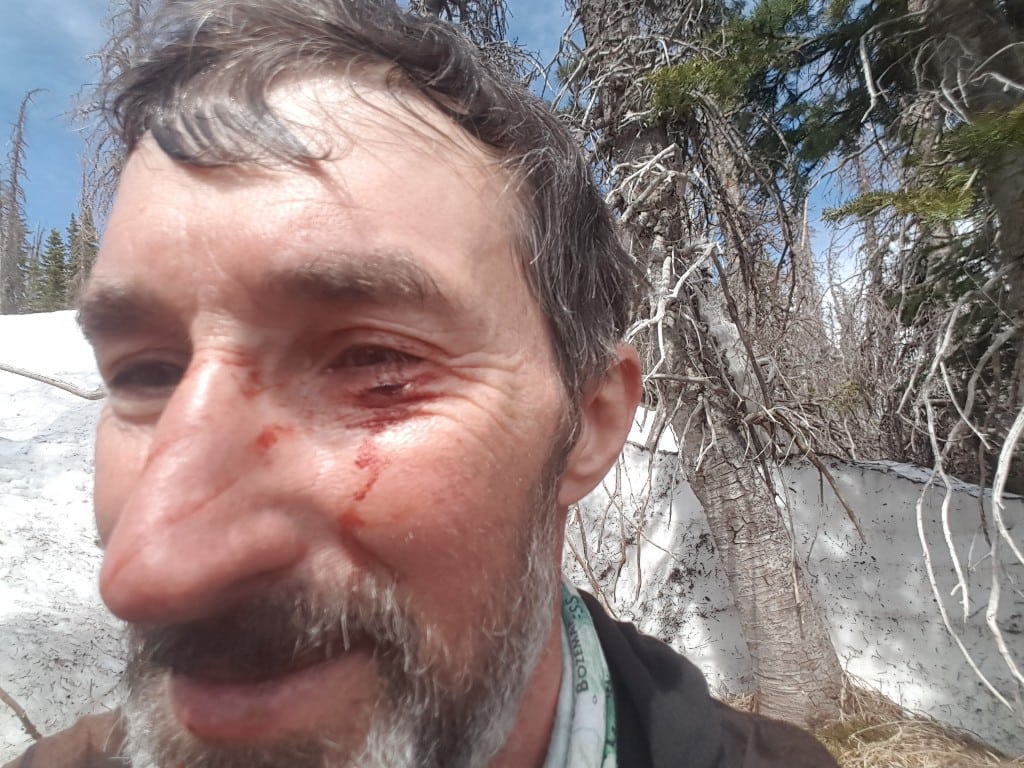 Lucky it wasn’t too bad

As I sat there on the ground, the pain slowly settled down, first it felt a tear drip down but it was blood but thankfully not much. Ken wanted to help and told me to open my eye, I put my hand up to indicate to give me a minute.  But slowly I opened  my eye and was relieved to know that my vision was still there and I felt relief. As it turned out, it was only a small cut below the eye so we carried on for another ten minutes to a place where we could sit on dry grass.

I was tired, the spot was with a view of the valley below, with a small stream for drinking water as it flowed over the edge. I must admit, I was careless in placing my backpack on the ground, i turned around to break an old branch that threatened to create problems such as stabbing us while we sat.  Before I knew it, Ken yelled out, pointing to my backpack as it was tumbling down the valley below.  I couldn’t believe my bad luck, so I made the slow journey down to recover my gear. Thankfully my bag held together when I finally found it, it had some tears and rips but other than that I hasn’t  lost anything and nothing was damaged.  The trip down and return took just under an hour with Ken waiting for me up the top, he meant to have lunch before the bag went over but he felt bad and didn’t eat until I returned. The pack started its adventure up near the trees, a big climb down and back up

For the rest of the afternoon I made slow progress and thankfully we found a sheltered spot to put our tents for the night.  I had fun with lighting a fire that night, i was impatient and wanted to put my pot in the fire before it was ready and the result was that the fire  died and smoked us out.  But finally I got it working as Iwanted  to save my gas and I was cooking rice which took 25 minutes, i purchased the rice by mistake as I meant to buy couscous as no cooking is required, just add water in a ziplock bag.