No bear sightings except one beer

Early start of 6 this morning, well that was the plan anyway until we decided to have a quick coffee at the cafe first.  We thought about having a big breakfast at the Swiftcurrent restaurant  but as it’s a national park, they charge a nice premium.  Coffee turned into two coffees for an extra dollar and Czech Mix had also coffee along with three beers.  He declared that three beers and not four or two was ideal to start the trail in the morning,  I must admit that when he does have a few beers before going on the trail, he is definitely faster. WiFi wasn’t available to the general public, only for guest’s where they enter their room number and name to logon. Fortunately  I meet a couple that was doing a month long train trip around america and were happy to log my phone in for me. Finally just after 9 o’clock we started back on the trail with the general theme from day walkers along the trail was Grizzly bears.  There’s been sightings and in one case a Grizzly bear chased a group of hikers that took refuge on a swinging bridge.

Sounds like the hikers were acting like mice when confronted with a cat, videos from the rangers station definitely say you should stand your ground and then slowly walk away and never turn your back and run. 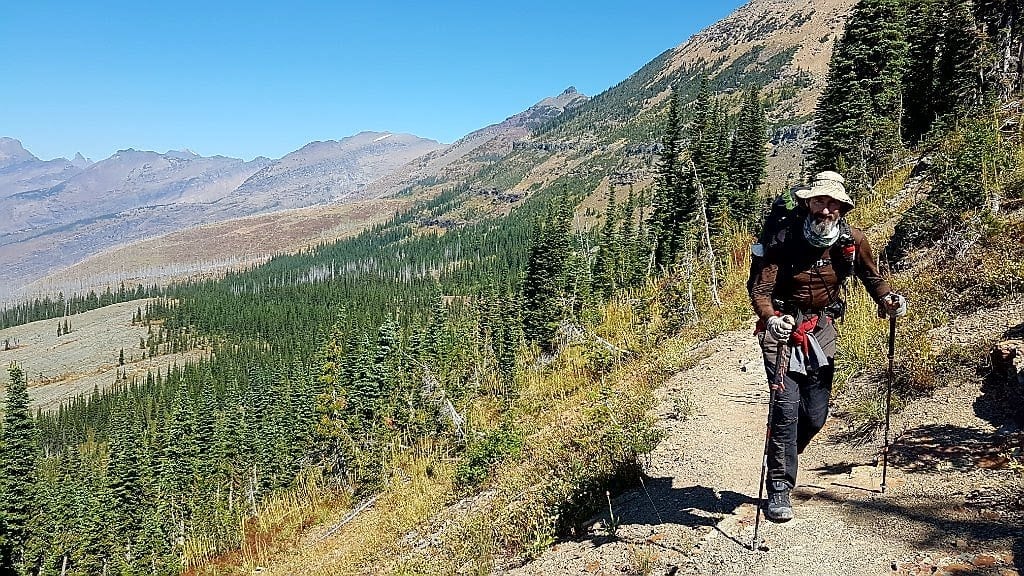 Another hiker walking towards us held two rocks in his hand as he said he didn’t carry bear spray. I’m not convinced that two rocks would deter a Grizzly bear in a full charge, if anything, probably make it very agitated.

The video at Yellowstone also said bear spray was best whereas if you shot the bear with a gun, there’s a good chance that it would maul you to death before dying itself. So a couple of rocks wouldn’t do much except really piss the bear off. So as you can imagine with all the day hikers reporting bear sighting, we were on guard and making as much noise as possible untill we started to climb the steep mountain where visibility was more open.

Did we see a Grizzly bear?  No.  And they said we would definitely have a bear sighting along the way. We passed a campground that was in the open and from a distance I could see it was full of hikers  that have already setup camp, our designated campsite was still another 8 miles.

While walking through a elderly lady jumped out with her shiny ranger badge on her uniform and proceeded in telling us that  this camp site is full and that we had to keep moving,  I think she was a volunteer and the power went to her head.

The reason they were there was because a Grizzly bear with two cubs have claimed this area as their territory and for hikers getting to close to the cubs and mother isn’t a good thing. Anyway we marched on and at 9:30 in the evening we finally got to our camp, dark with my head lamp batteries dead but thankfully the phone light worked a treat.

Made quick work in setting up camp and went to the food preparation area where you are meant to eat your meal and hang your food bag out of reach of any bears that may come along.