Alarm was set for 5am, sure it went off but it was just too cold, another half an hour I thought.  Finally when the sun was out we packed and started back on the trail at 7:30. 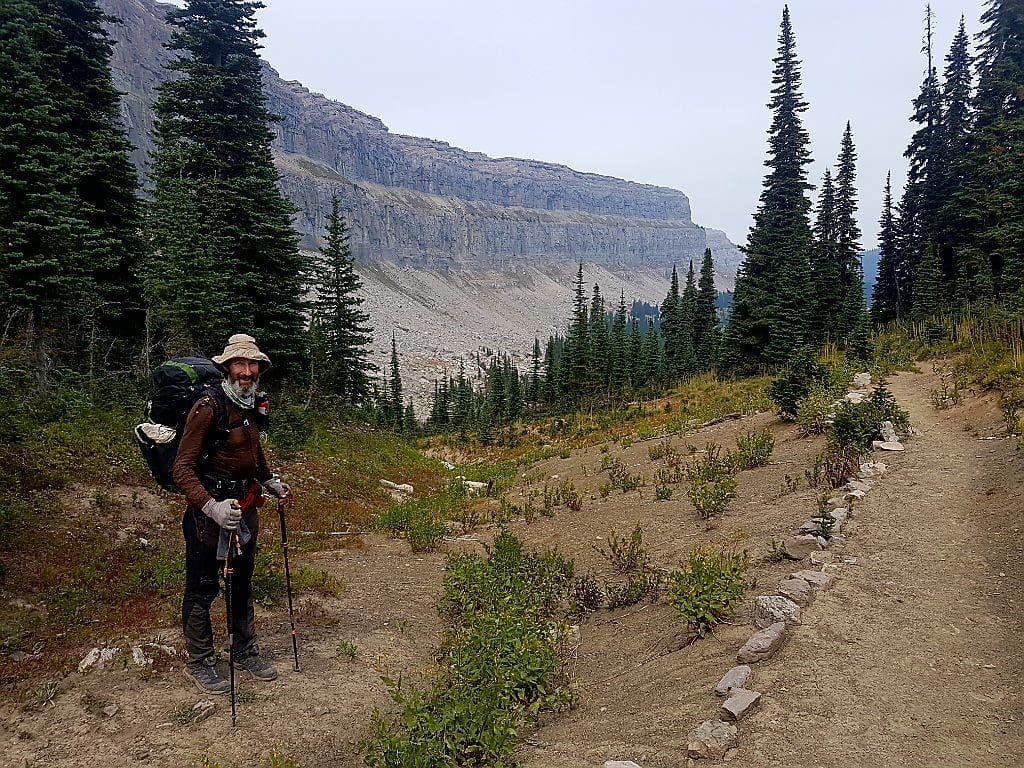 It’s a 4 hour climb to the pass before we see the Chinese Wall, along the way we passed  two woman that belonged with a team of horses but they had decided to walk to the pass, I think, going at their pace  it’s going to be an all day outing, as we raced past with our heavy backpacks

Sure enough once we got to the pass, the Chinese Wall was a great sight to see.  We didn’t stop for long as we were conscious that we had started late and still we needed to achieve a minimum of 25 miles for the day.  Our food is the limiting factor and budgeting for 8 days, we need to keep to the time table as best as we can. Stopped for second breakfast then at 3 o’clock for lunch, both were short 20-30 minutes where I had a variety of food from Tina, peanut butter, crackers and M&M’s. Where as Czech Mix just has energy bar oatmeal and Beef Jerky strips.  I kind of feel uncomfortable where I have so much food compared to him, he did say that he had put not much thought  into his shopping list, in fact no shopping list at all as he just walked in the grocery store filled the basket and look at it and felt it was enough. All this was done 20 minutes before we were due to get a lift back to the trail. Another words, no preparation at all. There seems to be an unwritten role that one doesn’t  ask another hiker for food,  I guess this is because the effort required to carry food for such a long time and one should have been more organised.  However I did offer Czech Mix that if he runs out, please ask me and I’m sure I have some spare food. Blueberries along the path, really nice

Spotted Bear Pass is the trail for the afternoon,, blueberries along the way that was a real nice treat, at first I wasn’t sure but they tasted nice enough so I went for it. Great views of the Chinese Wall

We pushed ourselves  today and even though we started late, we achieved 29 miles mainly becoused most of the afternoon was down hill and we took very few breaks. But setting up the tent at 9 o’clock  wasn’t much fun and then I had to find a tree where I could hang my food bag. That took forever to find a tree with a branch higher enough where a bear couldn’t  reach, throwing the rope over the branch was the biggest challenge, while doing all this a deer was following me about watching. Time to switch off the phone as it getting late at 10pm and I’m really beat.