From Queenstown we arranged a bus ride to get to the trail head to get us to Greenstone via Glenorchy. Costing 55 dollars. getting to Glenorchy  was by mini van then the rest of the way was with a 4WD because the roads are unsealed with a few river crossings due to the resents rains. Had my last hot real food at the Mrs Fergburger where in the afternoons there’s a line up of 20 or so people to buy their hamburgers. Same business with three shops, bakery, coffee and burgers. At 7am I went for a mince pie and a coffee and was very happy. Getting to Greenstone hut was easy, frequently  used by tourists which means it’s well maintained.
A couple of nice waterfalls long the way which were worth a stop and pause  for a photo. At the hut there was a couple with a young baby, I heard the baby cry and then realised what the outgoing hiker said about changing his mind in staying in the hut for the night and instead moving onto the next hut. I now think he was over reacting as some of the hikers can really get going with their snoring.

Unfortunately  the rain is starting to set in so I put all my weather gear on and then 10 minutes latter it was fine again, so an hour latter off with all of it again.

After leaving the tourist trail, the track became hard to find and with all hhe resent rains, I was walking ankle  deep water in open fields which would have been easy walking. 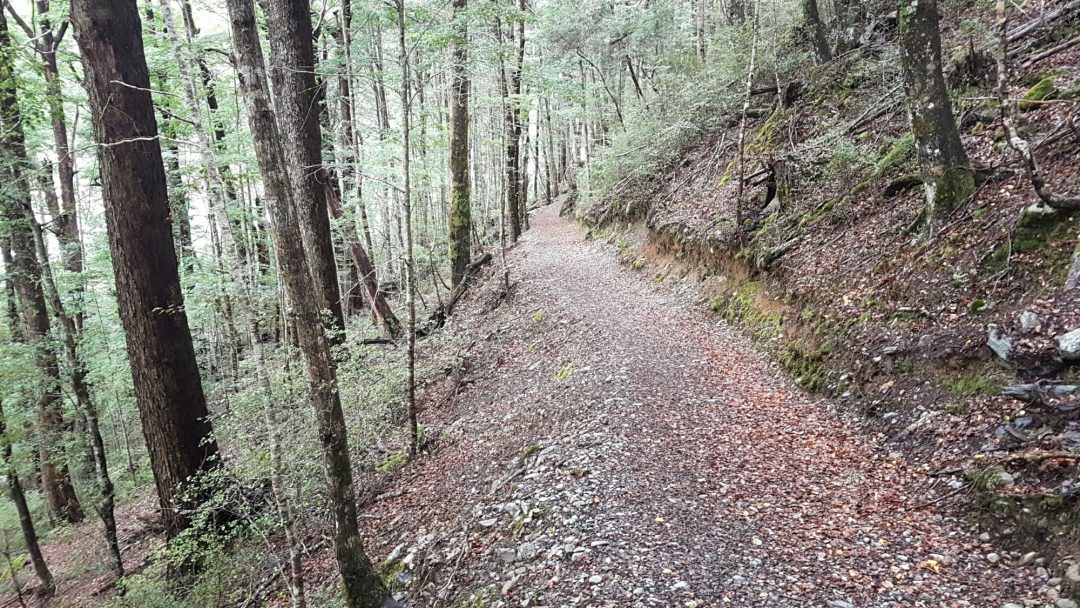 Taipo Hut, 4 bunk and as soon as we walked it, we were warm from the large window facing west which was getting the last of sun. Come 6:30pm we had our coffee, heaviest food item for dinner, crackers with cheese and then into our sleeping bag and pushing out the zzzz’s

During the night we had a visitor, a mouse, I laid in my bed watching him climb  up the drain pipe then onto the kitchen top where I had obviously left behind some cheese  bits. He looked so cute, each time I moved as i tried to take a photo of him , he ran. Latter that night he wasn’t  so cute as he attacked my rubbished bag I had left behind on the table instead of putting into my backpack which I hung up out of reach of my little friend. Come 2am I had enough of him attacking my zip bag that made much  noise in the quiet  night. I eventually had to take the bag outside.