Posting food to our next destination which is Cuba. Cost of posting is about the same as the content itself, in fact I think it’s more expensive but we need that 5 days of food waiting for us. 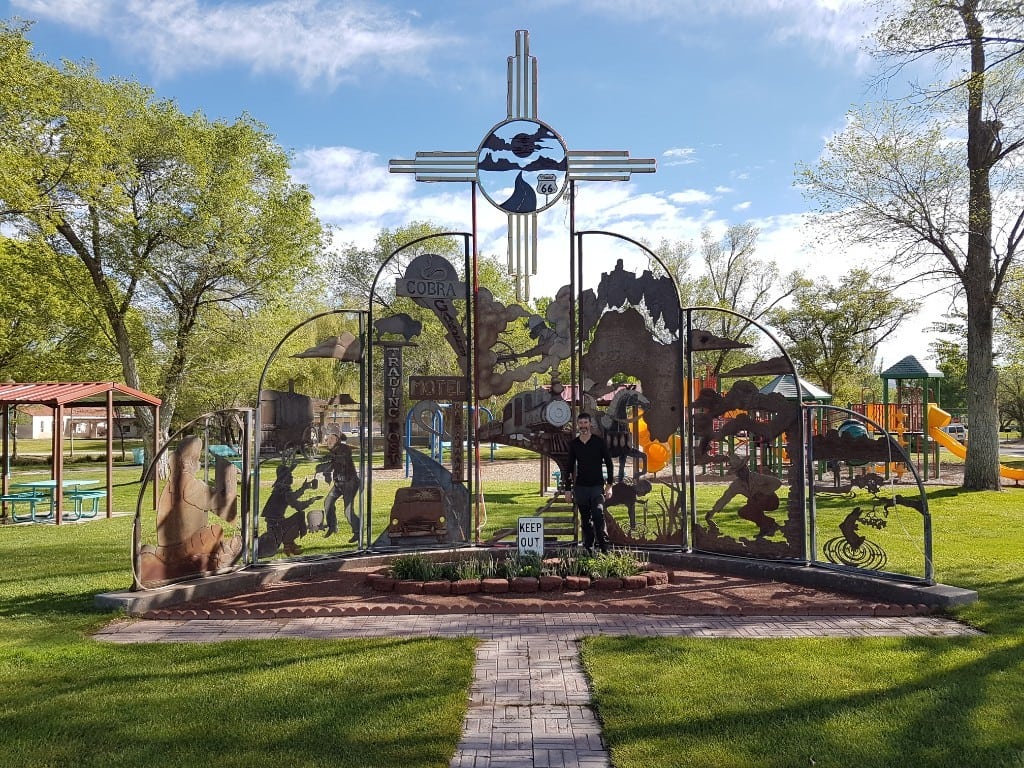 Grants monument for the mining town

Along the way into the town centre we counted no less than 6 loan shops that advertise no credit check required.  I’m not sure if this is normal or it’s just a reflection of the social economy of the area. One of the many  loan shops as we walked into town

Last bit of luxury before leaving Grants, a coffee that is well made, and being a hiker , we received a discount.  It was the same place we stopped at TWO days ago where local come in and filled up their plastic water bottles with filtered water,  I did the same as the tap water in the Hotel tasted terrible.

Mt  Taylor trail:
Walked 6 miles out of Grants along the national highway passing signs saying to drivers not to pickup hitchhikers, first time I’ve seen signs like that but later after an hour of walking I soon understood why.  There was a correction facility  (prison) that had much barbwire  along it’s double fence. The electrified wires that ran  horizontally in three layers on the inner fences, I would have thought would deter anyone wanting to escape.

Walked with another hiker for a while, he’s part of a group of five that is being sponsored by the military combat support organisation.  To qualify, he said that you must had done at least one combat  roll and the support they receive is unbelievable. First they get pocket money for city food, they get trail food where all they need to do is request what they want and every 500 miles they receive new shoes.  I’m hoping mine will last 1,000 miles,and so far with just over 500 miles done, they are holding up well.

I just hate it when other hikers dump their rubbish along the trail, I’ve seen beer cans, Powerade  bottles and plastic bags on this section of the trail.  I’m thinking it’s probably the section hikers that do this part of the trail in a day.

Mt Taylor  is in view with spots of snow on the top, we plan to tackle this mountain before sunrise and be in time to watch the sun come up, this means an early start tomorrow morning, I think Ken said 3:45 we head off.

Just before we camped for the night, we had to head off trail by a mile to collect water, this one was down hill which took about an hour return trip.  At the water source  was a clear pond filled with spring water and as a bonus, wild mint growing next to it.  The smell was so nice and the water was so refreshing.  With this extra “off-trail” miles we had to do, we were fortunate that the weather was mild. Water duly is where the water bottle is, very clean for a change

It’s a big climb tomorrow morning so I had my spicy Korean food,  all I needed to do was pour hot water in and zip it closed for 10 minutes and with chicken thrown in for protein I was very satisfied.  As a coincidence, both the chicken and the Korean food weighed the most and with the climb tomorrow to the summit, I wanted to do as much as I could to lighten the load and that includes excess water where I’m going to limit it to one litre.

By accident, I discovered why the sleeping bag is so cold during the night.  Each morning I’d wake up about 2am shivering with cold, even with all of my thermals on I was still cold.  While  I was setting up the tent I hung my sleeping bag out to air,  then noticed the setting sunlight passing through the bag and when I held it open, I could see large patches when there the down had disappeared.  5 more sleeps and I’ll have a new sleeping bag waiting for me in Cuba. The sleeping bag is almost see through, the down is gone Our camp site for the night